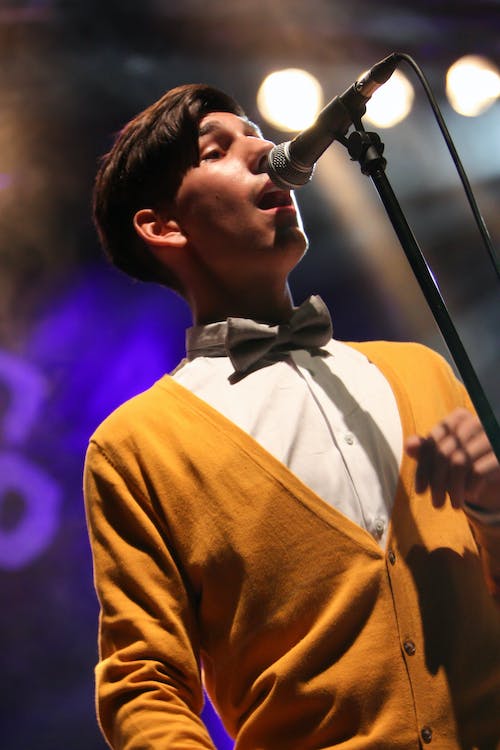 Improvised comedy—or improv—is a form of theatre in which the plot, characters, and dialogue of a show are made up on the spot. Usually this involves taking suggestions of words or phrases from audience members, but there are improvisers (such as Chicago’s TJ & Dave) who begin a show by simply looking into each other’s eyes.

Improv as a theatrical discipline has been popular in America for decades, but is now enjoying increasing popularity in the UK, too. It’s usually done onstage in front of a live audience, though improvising for camera is beginning to gain a following of its own. However, we’ll be focusing here on the live stage format.

WHAT ARE THE DIFFERENT TYPES OF IMPROV?

There are countless improv games, structures, shows, groups, and disciplines to be found under the umbrella of improvised comedy, but they tend to fall into two main categories: short-form and long-form.

Short-form improv is a style in which quick and typically unrelated comedy scenes are played. Think of the classic TV show Whose Line Is It Anyway? for reference. The most basic version of a short-form scene involves taking a suggestion, then simply making up a scene. A more structured improv “game” might involve rules for the scene, or perhaps a competitive element.

An example of a short-form game is The Question Game—a challenge where improvisers can only ever speak in questions. A competitive version of this might include losing a life if you make a statement rather than ask a question, or hesitate too long between lines.

Long-form improv is harder to define, but in general, suggestions are taken at the beginning of the show, then the audience is left to watch them built upon, rather than continuously asked for new themes.

Arguably, the most famous long-form structure is the Harold—a format that begins with a game that associates around an audience’s suggestion, then typically involves three rounds of scenes interspersed with more games. Long-form shows tend to be more narrative-driven and have themes that are brought back throughout.

Put simply, short-form improv is a series of games or exercises that last a couple of minutes, each based on a new suggestion and not necessarily connected to previous scenes. Long-form improv involves structures that tie together multiple scenes to enable a full-length show to unfold from one singular suggestion. Think of it as a sketch show versus a play.

Why is improv useful for actors?

As well as being a stand-alone skill, improv can make you a better actor in many ways.

The most obvious benefit is that it keeps you in the moment. From allowing yourself to take risks while you’re finding a character to keeping performances fresh every night, improv takes you out of your head, allowing you to discover truth and honesty in the moment.

Improv is a team sport. It’s about going onstage with your fellow performers and trusting that together, something will happen. There’s nothing worse onstage than a selfish improviser—they can sink a whole show—and you soon realise the best actors serve the show as a whole, rather than concentrating solely on their own standout moments. Improvisers are cogs that keep the wheels of a show working and moving forward, and improv is great for curbing ego.

A lot of non-performers use improv to build self-confidence. The discipline is increasingly used in corporate work to help companies embrace innovation and cultivate a supportive working environment. For actors, this mindset can also relieve fear and stage fright. When you’ve had to make up an entire show from scratch, suddenly having words to fall back on doesn’t seem so scary. Without the gripping fear of failure, the space that’s usually preoccupied with figuring out what’s going to come next is free to embrace the moment. It breaks you out of your comfort zone and not only helps you deal with being put on the spot, but enables you to actively embrace it!

And for those occasional moments when your mind genuinely goes blank, now you have the tools to improvise your way out of it!

How to use improv in a scripted show?

Using improvisation as a tool in rehearsal can enable an actor to conjure up a more rounded version of the character they’re portraying.

And beyond the use of unscripted rehearsals, the skills you develop as an improviser can be invaluable in bringing a script to life.

Being stuck in your mind can greatly affect your willingness to take risks in a rehearsal room, and improv has the unique ability to get you out of your head. An improviser needs to be able to bypass fear to create full, believable, well-rounded characters out of thin air, almost instantaneously. Sometimes those characters work and sometimes they don’t, but a willingness to experiment with character and physicality—and to accept that failure is an important part of success—gives actors the permission to take risks. Think of your favourite acting performance. Was it safe or was it brave? Most likely it was the latter.

An element of play in rehearsal is also vital in creating a finished product that doesn’t feel forced. Being open to moments of realness in rehearsals—ones that can either be worked into the finished product or simply kept in the back of your mind—can provide joyous results.

Nobody wants to see actors just walking around, saying lines, and hitting marks. They want a play to breathe, and they want to see a version that’s unique. Improvisers know how to bring themselves to a part, creating something special and unique without ever taking over the show. We don’t want to see someone else’s performance—we want to see your take on the role. Improv allows you to see beyond the lines and breathe life into the written word.

Here are a few important terms for improv newbies:

Yes, and…
Considered the cornerstone of improv, “Yes, and…” means two things:

“And…”: Adding and expanding on a line of thinking to move a scene forward. This means not only agreeing with other improvisers, but also adding to the scene, the world, and the relationships in it.

If you follow the basic tenet of the “Yes, and…,” you’re off to a great start!

Blocking
This is the opposite of “Yes, and…,” and means rejecting the ideas of other performers. It’s a common fallback for nervous improvisers, as it can generate a cheap laugh, but it undermines the scene and trust between players.

Endowing
Improv is a team sport that relies on players making decisions for others as well as themselves. When you endow, you give another improviser attributes to help flesh out their character. When done well, this is what makes a relationship fly.

Callback
A general term in comedy, a callback is when you bring back an idea from earlier in the show. These can be very impressive when done well, and audiences love them, but pick your moment carefully.

Striking
If a scene is going on too long or someone has just said a line so spectacular it couldn’t possibly be topped, another player can strike the scene. This is usually done by running across the front of the stage. Improvisers can, of course, end scenes themselves, but this offers an option for an outside eye.

Rule of Three
For some reason, things are just funnier in threes! It’s worth keeping the rule of three in the back of your head, not only to allow you to explore ideas further, but also to stop you from taking a joke too far.

Bulldozing
Something you must let go of during improv is the idea that the way you saw a scene going at the beginning is the “right” way, and it’s something every improviser grapples with. Bulldozing is when a performer hijacks a scene (or show) and pushes it toward how they want it to go rather than where it’s heading organically. This will not only make you an unpopular player—it also stops it from being improv!